5 More Gun Safety Rules That Everyone Should Know

Paramount on every gun owner’s to do list whether a beginner or more experienced, is safety whenever a firearm is in hand. We all know the four rules of firearms safety, right? Here are the 4 basic gun safety rules, in no particular order:

That’s the basic stuff. Then, moving on from those, are the more advanced, sort of unwritten gun safety rules which also need to be followed.

Because I can’t be sure where we are all at in our training, it’s good to sometimes start in the beginning with everyone. And hey, if you know all of this, a refresher can’t hurt. Right?

Never hand someone a loaded weapon.

This is true for people who work in a gun store, in the military or police, or just showing a gun to one of your friends. It tends to give peace of mind to the person on the receiving end of the gun, assuring them that it isn’t going to go bang if the switch is accidentally pressed.

Going a step further than this, I always tend to hand someone a gun with the action open. Please note, that the word action, may be described as a slide, pump, bolt, etc. Whatever it may be, open it, and then hand that person the firearm.

If, for some reason, the action cannot be locked back it’s a good idea to open it, inspect it visually, and announce that the “weapon is clear,” verbally.

About two years ago, I was handed a loaded .22 revolver from a friend’s kid. Sadly, neither the friend nor his teenage son knew that this was an unacceptable practice. I taught them why this was a good idea in quick fashion, and then proceeded to hand the revolver back to them with an empty cylinder.

The problem, and the reason why this is so important, is because you can never be sure of the other person’s firearm training, or their state of mind. Handing someone a loaded gun is just asking for problems.

Know the limits of your firearm, and what it is capable doing.

All too often do I see people who have never fired their gun before, carry that un-fired gun. First off, you will not be successful at self-defense until you’ve actually shot your gun multiple different times, hopefully in differing scenarios.

Even though the circumstance you practice for will be totally different than your defensive gun use will be, you need to have a solid understanding of what your gun is capable of doing, how it handles, and its limits.

What if you pull your gun out to defend yourself but totally miss the bad guy, hitting an innocent, because you had no idea how to handle the gun in your hands? It could happen, especially if you’ve never fired your gun before.

Your gun needs to become an extension of yourself while in your hands, and the only way you can do that, is if you actually go to the range with it.

You should never trust your safeties if you use a gun equipped with one. In addition to not trusting them, you need to fail test them to see how and if they work. If they do not work, your gun is defective and you need to have someone look at it.

However, even if they do work 100% of the time you test them, mechanical things break, and so do gun safeties. While it has never happened to me, I have had friends experience safety malfunctions.

It happens, and this is one of the reasons for the four basic rules for firearms safety. Never assume your gun’s safety will do what it is supposed to, always treat every weapon like it’s loaded, pointed in a safe direction, and with your finger off the the trigger.

Here is an example of someone’s M&P15 firing when switched to safe:

If you do use a safety on your carry gun of choice, that is totally fine. The most important thing is for you to train with it. The last thing you would ever want while in a firefight is to forget that your safety is on, and not turn it off.

Again, because it bears repeating, train with your weapon in the manner that you carry your weapon. If you use a safety, go to the range and practice drawing from the holster, clicking the safety off and firing.

Never assume someone knows as much as, or more than, you do.

This is a huge deal, because you’d think that people who staff gun store counters actually know a thing or two about guns. Sadly, many of them don’t, especially if you go to one of the bigger box stores where you can buy a gun.

Some of these people are just filling a position, and have just barely enough firearms knowledge to actually lock the slide back on a 1911. Some of them may even be unable to field strip a gun to clean it.

Again, never assume that someone has firearms knowledge. And, if you ever see someone doing something unsafe, make sure you correct him/her immediately. This is the only time you should ever give someone advice. If someone is doing something that could get someone killed or otherwise hurt, it is your duty to say something to them.

Here’s a video of some idiots helping a poor lady do something she shouldn’t have been:

Always point your gun in a safe direction.

Wait, isn’t this one of the basic gun safety rules?

Well, yeah. But, let’s travel back to the subject of the gun shop really quick.

Quick question for you: Have you ever been muzzled while walking around a gun shop or show? I know I have, and it pisses me off to no end. Seriously, it’s unsafe. Remember that video up top where the cop shot himself in the gun shop? It happens more often than you’d hope.

Point the muzzle up toward the ceiling so that you don’t make someone an unintended target. And, before you criticize this one, saying how stupid it is, go watch that above video again, where a cop shot himself in the hand because nobody cleared the weapon first.

Can you imagine if he did what many unsafe gun handlers do at the counter, putting two hands on it, lining up the sights, and pulling the trigger?

Okay, let’s recap in case you were too lazy to read the entire article …

If you’re looking for more info, the NSSF does a great job of explaining gun safety rules.

If you’re in need of any ammo or related parts, please check out our online database of in stock ammunition. 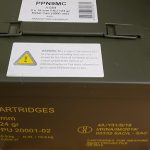