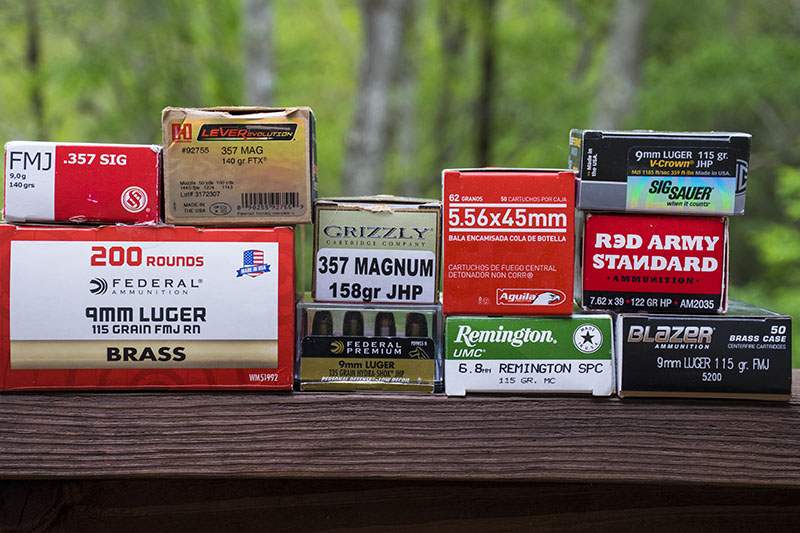 Here is a selection of a few different brands and calibers of ammo, with a mixup of different markings on the boxes.

The ammunition box can be daunting, so I figured it was a good idea to cover just what the stuff on the ammo box means, to help you wade through the obscurities you may face when buying ammo.

Before we get there, though, let’s discuss who I am and why you can take advice I offer you as factual. My name is Josh and I’ve been working for the gun industry in one capacity or another for several years. I’ve worked for some prominent gun publications as a writer and reviewer, have been a managing editor for two large gun publications, one being concealedcarry.com, for over four years.

And, I own the gun blog gunnersden.com.

The rest of this blog post is meant to discuss rifle and pistol ammunition. We’ll tackle shotgun ammo in a future article, because that’s a whole other can of worms.

There are a couple of different numbers your ammunition box may have on it. The first one that’s prominent is going to be the caliber of the ammunition itself. You should always only pick ammo that your firearm is rated for. This can be confusing, because some ammo is so similar it can be hard to figure out.

If you’re not sure what your gun fires, read the owner’s manual. Also, it should also say it on the gun itself, somewhere.

What about the other numbers?

The other numbers on the ammo box are usually going to be the weight of the bullet (projectile) in grains. Each caliber of ammunition has its own typical and non-typical grain weight bullets. For example, a typical (common) grain weight for 9mm is going to be one of the following:

A non-typical (which is another way of saying less common) grain bullet for 9mm Luger is going to be something like this:

They can still be found for sale and will work in most guns just fine, they just aren’t as popular. In fact, one of my chosen defensive loads are 135 grain hollow points (actually in the above picture if you look closely).

Any other number found on the side of the ammo box are typically going to be average velocities or energies from the cartridge itself. Not all ammunition manufacturers put this info on the box, and even then, not all types of ammo have it from the manufacturers who do list it.

Ammunition abbreviations and other letters

Now we move on to where even I have to stop and think about things for a minute every so often. It can be so confusing because there are so many different types of ammo that I’ve somehow managed to walk out of the store in the past with the wrong stuff on accident.

First, we’ll talk about the most popular types of ammo, and then list out the ones that are less so. Also, this is not an exhaustive list.

FMJ stands for Full Metal Jacket and is typically the ammunition used by people at the gun range.

The main reason why is because it’s not only the most abundant ammunition at the store, all guns should shoot FMJ just fine and it’s the most affordable type of ammo.

JHP stands for Jacketed Hollow Point and is the standard for self-defense ammunition. Because they’re hollow in the center, they will expand when they hit something, usually something wet like the inside of a human body.

They can still expand somewhat when they hit something hard, but this is inconsistent.

What I’m about to say next is important, you should only use ammunition designed for defensive use in defensive applications. The reason being, hollow points actually stop the threat much faster. AND, they’re also more humane.

If the person is likely to succumb to their wounds anyway, helping them do it faster is a better idea to limit suffering.

HP-BT or HPBT stands for Hollow Point Boat Tail. So, this is a common acronym for rifle ammo and basically means that the tip is hollow for controlled expansion and the end is shaped like a boat tail for aerodynamics and to help it fly better.

FMJ-FN or sometimes just referred to as FN stands for Full Metal Jacket Flat Nose. This is essentially target ammo that’s flat on the tip instead of rounded or hollowed out.

These are just Full Metal Jackets with Round Noses.

LRN stands for Lead Round Nose. This is essentially target ammo without a jacket, or copper coating. So, what you’re essentially getting is exposed lead. It’s dirty.

FTX is Flex Tip Technology. Hornady made this popular, but you will see other manufacturers use it who load bullets from Hornady in their cartridges. These are essentially a hollow point bullet with a polymer part in the middle to help the bullet not expand until the appropriate time.

Finally we get to the +P and +P+ ammunition. The “P” here stand for pressure and the + basically stands for “increased.” So, in the case of +P it means “increased pressure” ammo. And for the +P+ the pressure is increased even higher.

The higher pressure on these munitions essentially increases terminal ballistics. It helps the projectile move from the muzzle faster and, in turn, create higher energy on target.

More energy delivered to your target essentially increases the chances that your target goes down faster.

The important thing to remember here is that not all guns are rated for increased pressure ammo. The best way to find out if your gun can handle it is by reading the owner’s manual your firearm came with.

The reason why not all guns can handle it is because it causes increased wear and tear on the gun’s components and parts.

It’s always a good idea to know what kind of ammunition your gun fires, as well as what its purpose is for.

If you’re ready to buy, I urge you to check out our in stock ammunition database from several different online retailers.

All products in stock, showing best prices to the best of our ability from major retailers. The firearm market is volatile right now, so we cannot make any guarantees. Dismiss